Where does the silk come from?

We buy most of our silk from China and a very small amount (the shot dupions) from India. We have been buying directly from China for about 25 years now and have a good relationship with a factory. We have visited our supplier many times the factory was clean and well run. The Factory is GLOBAL ORGANIC TEXTILE STANDARD, ECOLOGY & SOCIAL RESPONSIBILITY Certified.

China is responsible for most of the world’s silk production. It comes to us white and we do everything else to it.

The majority of our fabrics are 100% pure Mulberry silk. The ones that are not, for example, velvet, silk/viscose satin and other mixed fabrics, then these are clearly marked.

Our Natural White silk is Global Organic Textile Standard Certified. A GOTS certification means that the fabric contains at least 70% organic natural fibres; it is not treated with bleach, formaldehyde or other toxic substances; it is coloured with non-toxic dyes, and is produced according to strict social and environmental standards.

What do you produce on-site?

Although we don’t weave the silk (it comes to us white on rolls) we do carry out all of the silk printing and dying processes here at Beckford.  We have an expert team of designers, screen printers, digital printers, dyers, and sales team working on site. That’s why we can respond so quickly to process your order.

What's the minimum I can order?

What if I am unable to order online? Is there someone I can speak to?

If you are unable to make an order online we are more than happy to take your order over the telephone. All orders are processed through the website so any orders taken over the phone are placed on the website on your behalf. Most banks have added extra security checks, so please have your mobile/email to hand in case they need to send you a one time password to complete the order.

Can I come and see the fabric before I buy?

Yes, The Silk Store, Velvet Box and Accessories Shop are all open to the public Monday to Saturday.

Yes, if you click on individual fabrics and colours that interest you, then there is a facility for adding a swatch (4″ x 6″, 10 x 15cm) to your shopping basket. Please see How to order samples here. You can also purchase cards showing our full range of white fabrics, our range of velvet colours, as well as a colour card showing our complete range of 81 stock colours.

How soon will I get my order?

Once we receive your order and the payment has gone through we will prepare and dispatch your order, if the item is in stock and the order is before 1pm it is usually the same day. For Items available on back-order (out of Stock) please allow us up to 5 working days to dye your cloth and up to 3 weeks for printed fabric. For further information on how long this will take please contact us at silkstore@beckfordsilk.co.uk or 01386 881507. Thank you

How is my order sent?

I am ordering from abroad. How quickly will I get my order?

We have an increasing number of customers in Europe and find that on average, packages take about 14 to 21 days to be delivered. Also if you have a EORI number then this can be entered in the checkout. For customers in America, Canada and Australia, then it can take up to two weeks. If you want your order to be sent using a courier, then email us and we will get you a quote.

Are your silks washable?

Our silks are hand washable and if they are dyed or printed, they have already gone through a wash as part of the process.

We recommend that you hand wash your fabric, scarf or finished garment in tepid water and a mild detergent. Once rinsed, gently squeeze out the excess water (do not wring when wet) and lay flat between towels until you are ready to iron. Iron damp on the reverse with a fairly hot iron.

We do recommend all fabric is washed separately before use, this will allow any excess dye to be removed and shrinkage to occur before cutting.

Are your velvet's washable?

The velvet has already gone through a washing process. HOWEVER, you will need to tumble dry it in order to raise the pile and restore the softness of the fabric. If in doubt, dry clean.

We do recommend all fabric is washed separately before use, this will allow any excess dye to be removed and shrinkage to occur before cutting.

Can you dye a dress for me?

No, sorry. The dying equipment we have only works for lengths of fabric and not made up garments.

Is there any danger of burning the silk with an iron?

Only if you leave a hot iron resting on it for a period of time!
But seriously, don’t be nervous of silk, it’s actually pretty tough stuff. But please do not wring it when it is wet.

What thread should I use to sew silk?

We use ordinary Gütermann threads. We don’t use pure silk thread as it tends to knot too easily and is very expensive.

What are the different types of silk?

Silk is a natural protein fibre, some forms of which can be woven into textiles. The protein fibre of silk is composed mainly of fibroin and is produced by certain insect larvae to form cocoons. The best-known silk is obtained from the cocoons of the larvae of the mulberry silkworm Bombyx mori reared in captivity (sericulture). The shimmering appearance of silk is due to the triangular prism-like structure of the silk fibre, which allows silk cloth to refract incoming light at different angles, thus producing different colours.

The 100% mulberry silkworm threads are used to form different weaves. 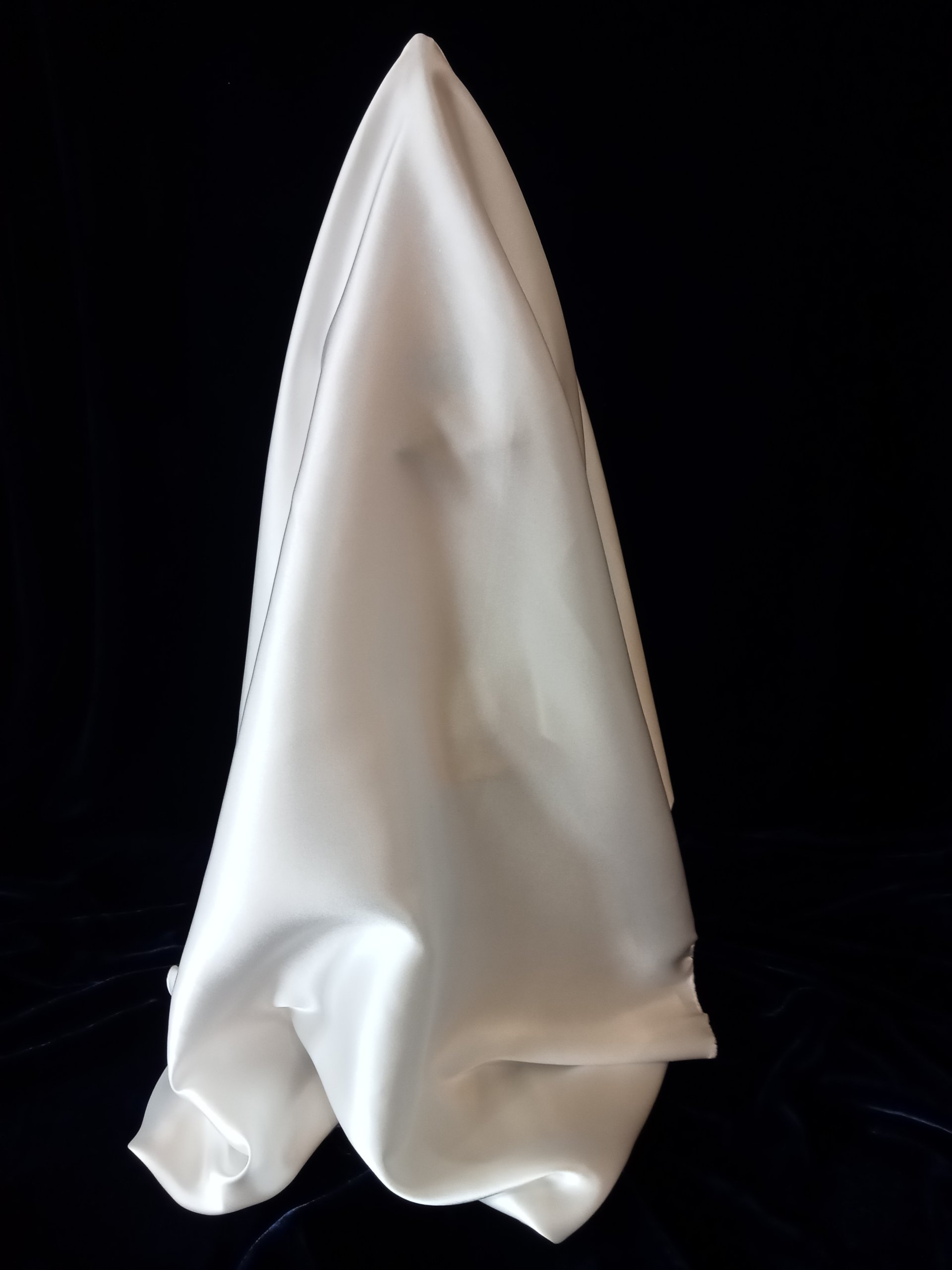 Satin / Charmeuse refers to the weave of fabric rather than the material. It typically has a glossy surface and a dull back, one of three fundamental types of textile weaves along with plain weave and twill. The satin weave is characterized by four or more fill or weft yarns floating over a warp yarn, four warp yarns floating over a single weft yarn. Floats are missed interfacings, for example where the warp yarn lies on top of the weft in a warp-faced satin. These floats explain the high luster and even sheen, as unlike in other weaves, the light reflecting is not scattered as much by the fibres. Satin is usually a warp-faced weaving technique in which warp yarns are “floated” over weft yarns, although there are also weft-faced satins. If a fabric is formed with a satin weave using filament fibres such as silk, polyester or nylon, the corresponding fabric is termed a satin, although some definitions insist that the fabric be made from silk. If the yarns used are short-staple yarns such as cotton, the fabric formed is considered a sateen.

Satin is commonly used in apparel: women’s lingerie, nightgowns, blouses, and evening gowns, but also in boxer shorts, shirts and neckties. It is also used in the production of pointe shoes for use in ballet. Other uses include interior furnishing fabrics, upholstery, pillowcases and bedsheets. 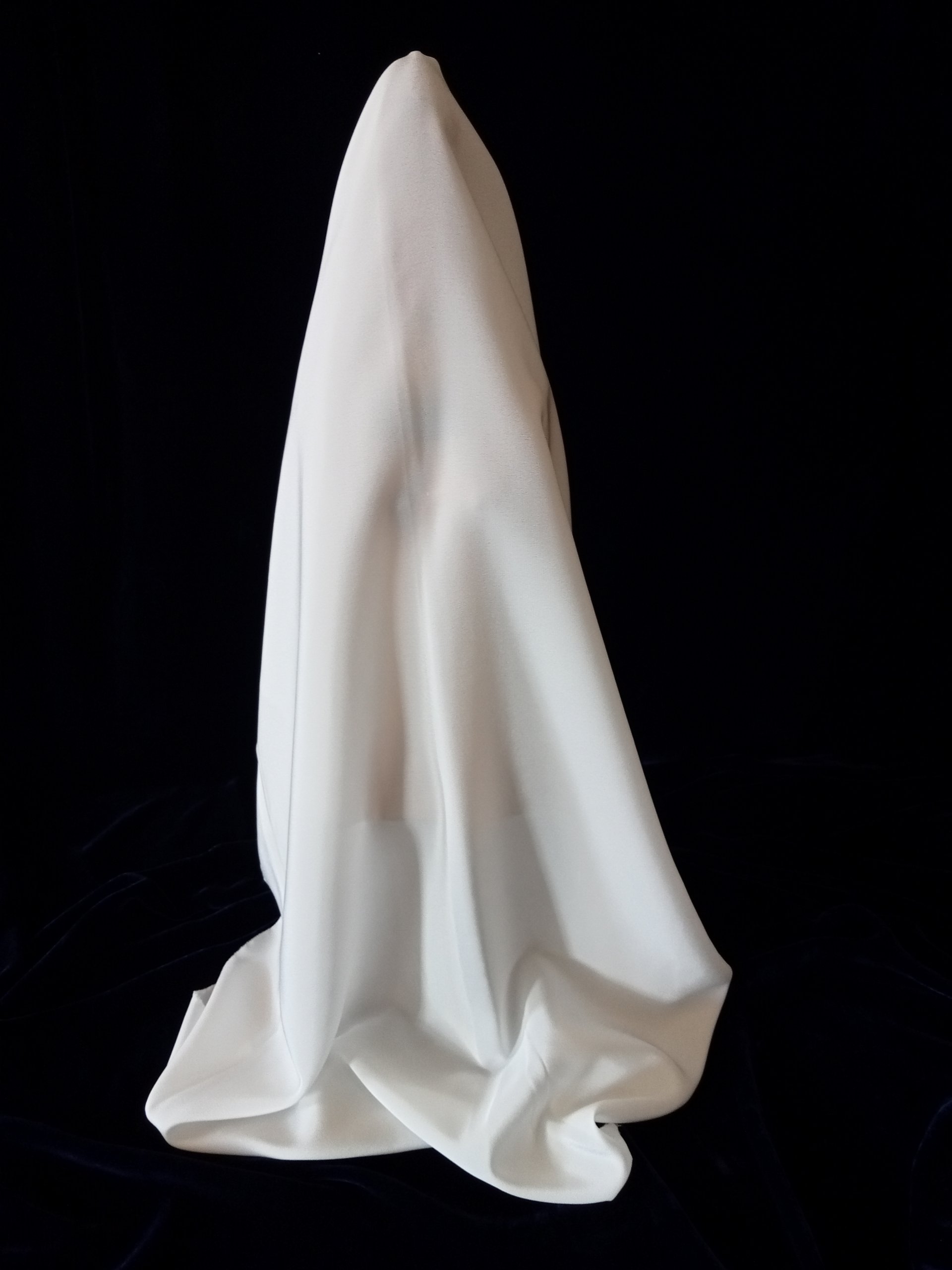 Crepe de Chine, also spelt Crêpe De Chine, (French: “crepe of China”), light and fine plain-woven fabric produced either with all-silk warp and weft or else with a silk warp and hard-spun worsted weft. A crepe de Chine texture has a slight crepe character, a feature produced by the use of weft, or filling, yarns spun with the twist running in reverse directions and known as right-hand (clockwise) and left-hand (anticlockwise) twist, respectively. During weaving, the picks of filling are inserted in the order of “two-and-two” (i.e., with two picks of weft with a right-hand twist and two picks with a left-hand twist).

Silk crepe de Chine fabric doesn’t have the puckered surface typical of other crêpes; instead, the silk fabric has a smooth, matte finish with slight pebbling. Habotai (from the Japanese habutae ), literally “feather-two-layer”, is one of the most basic plain weaves of silk fabric. While it was traditionally woven in Japan, most habotai is today woven in China. Habotai is also known as Parachute silk or Pongee silk

Like other kinds of silks, habotai comes in a variety of weights (thicknesses) which is measured in mommes (abbreviated mm). A lightweight and sheer habutai silk might be 8 mommes (“8mm”); a 16mm habutai is considered quite thick.

Habutai is a lightweight and very tight woven, shimmering material once used mainly for making silk kimonos, today it is normally a lining silk but can also be used for T-shirts, lampshades, summer blouses or very light lingerie. It is also the choice of fabric for silk painters. 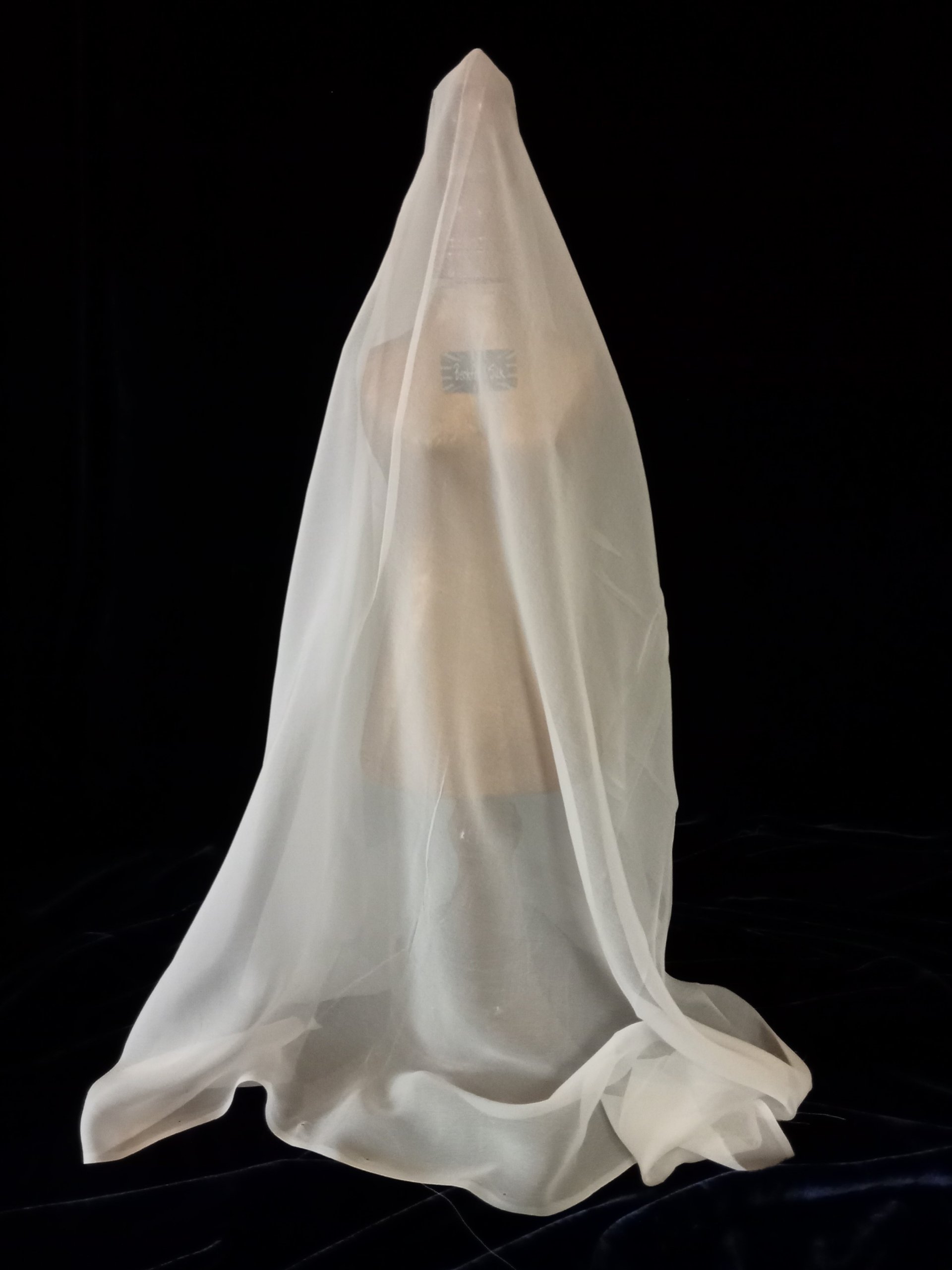 Originally made from silk, Georgette is made with highly twisted yarns. Its characteristic crinkly surface is created by alternating S- and Z-twist yarns in both warp and weft.

Georgette is made in solid colors and prints and is used for blouses, dresses, evening gowns, saris, and trimmings.Georgette has a very light and drapey hand, rendering it best suited to loose flowing garments and inappropriate for more structured pieces. Silk georgette is relatively delicate. The crepe style S- and Z- twist weave makes the fabric springier and less lustrous than the closely related chiffon. 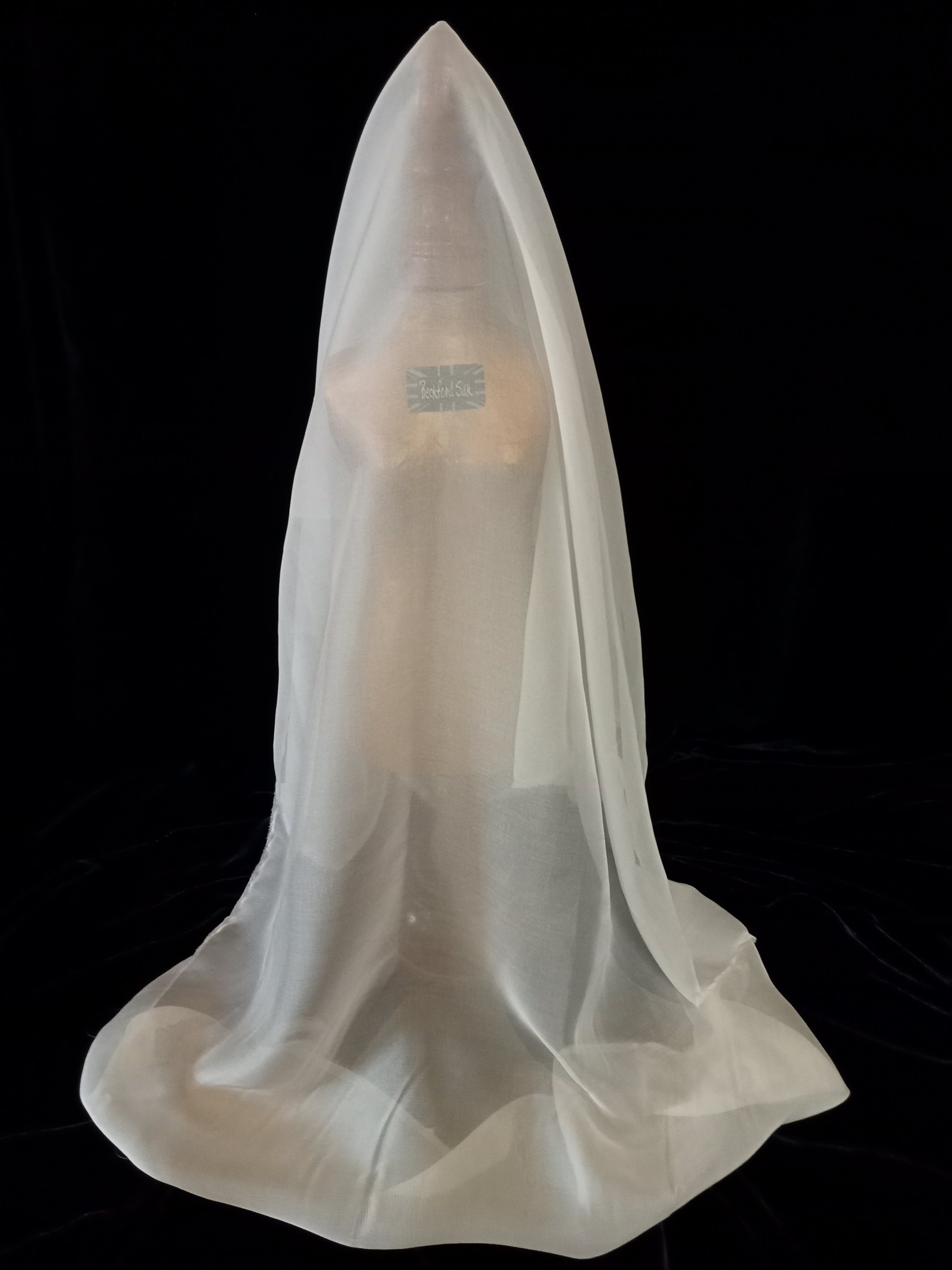 Chiffon is a lightweight, balanced plain-woven sheer fabric, or gauze, like gossamer, woven of alternate S- and Z-twist crepe (high-twist) yarns. The twist in the crepe yarns puckers the fabric slightly in both directions after weaving, giving it some stretch and a slightly rough feel.

Early chiffon was made purely from silk. Under a magnifying glass, chiffon resembles a fine net or mesh, which gives it some transparency.

Chiffon is most commonly used in evening wear, especially as an overlay, for giving an elegant and floating appearance to the gown. It is also a popular fabric used in blouses, ribbons, scarves and lingerie. Like other crêpe fabrics, chiffon can be difficult to work with because of its light and slippery texture. Due to this delicate nature, chiffon must be hand washed very gently.

Since chiffon is a light-weight fabric that frays easily, bound or French seams must be used to stop the fabric from fraying. Chiffon is smoother and more lustrous than the similar fabric Georgette. 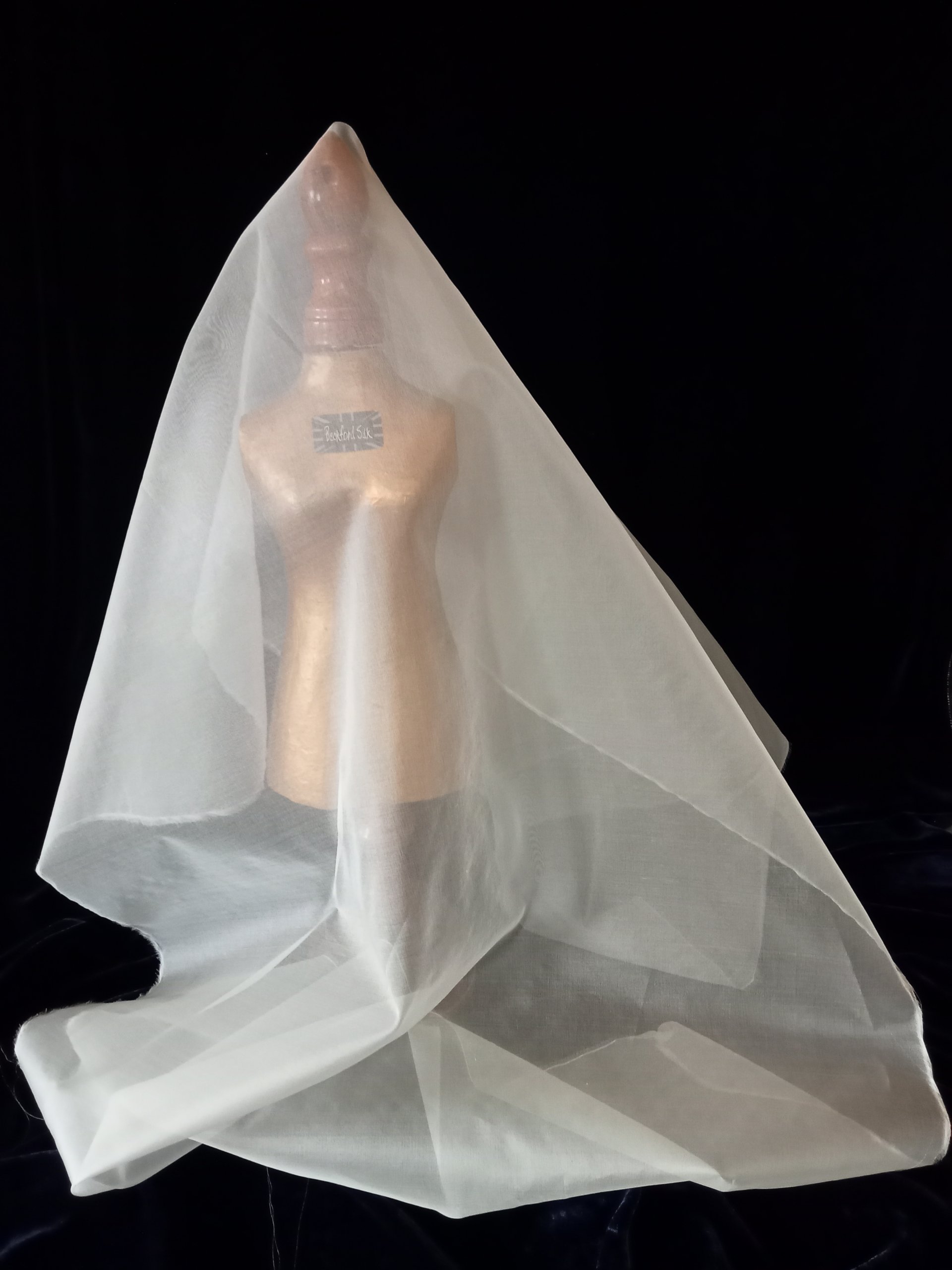 Organza is a thin, plain weave, sheer fabric traditionally made from silk.

Organza is used for bridalwear and eveningwear. In the interiors market it is used for effects in bedrooms and between rooms. Double-width organzas in viscose and acetate are used as sheer curtains. 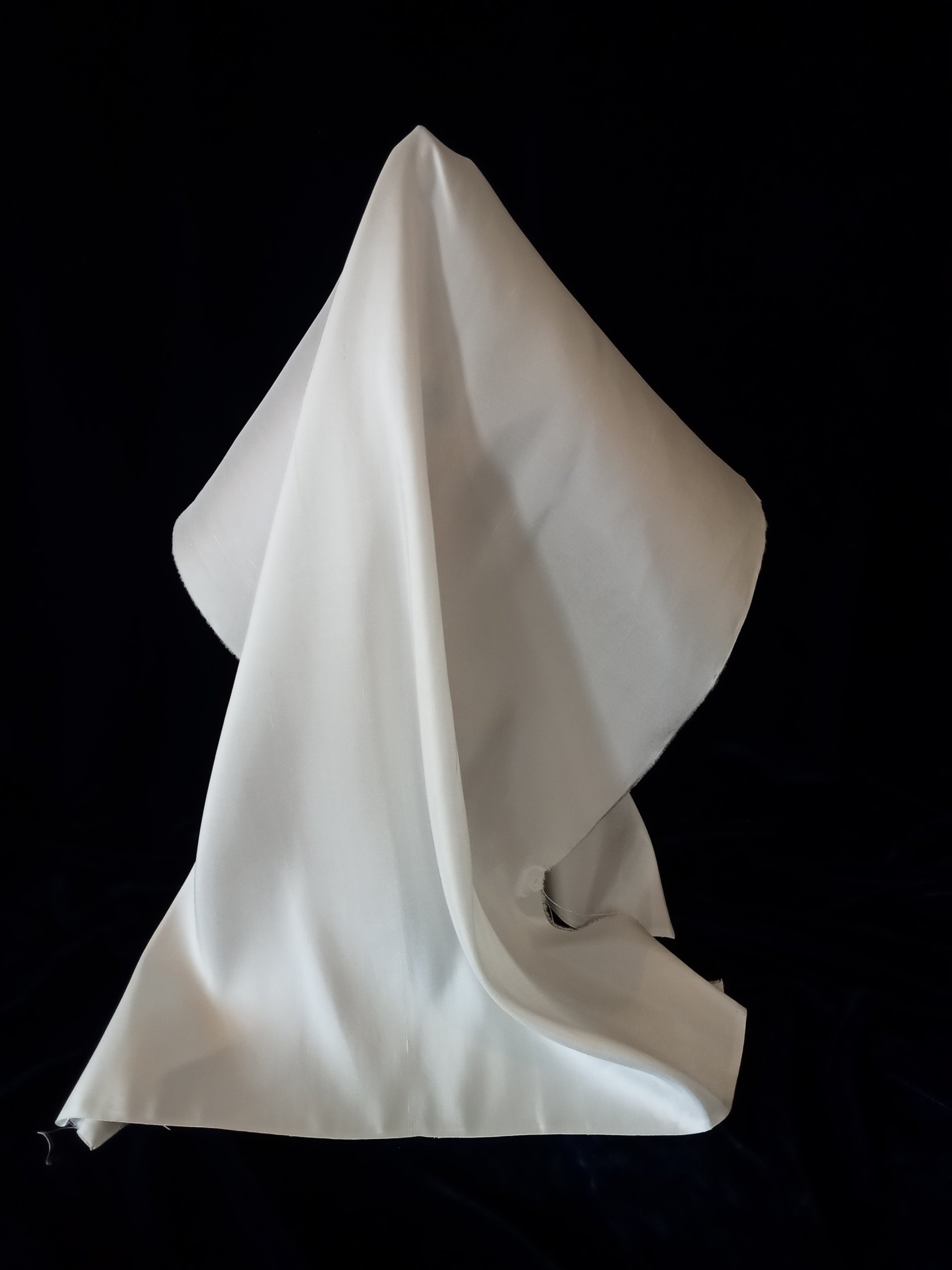 Dupion also referred to as Douppioni or Dupioni is a plain weave crisp type of silk fabric, produced by using fine thread in the warp and uneven thread reeled from two or more entangled cocoons in the weft. This creates tightly-woven yardage with a highly-lustrous surface. It is similar to shantung, but slightly thicker, heavier, and with a greater slub (cross-wise irregularity) count. 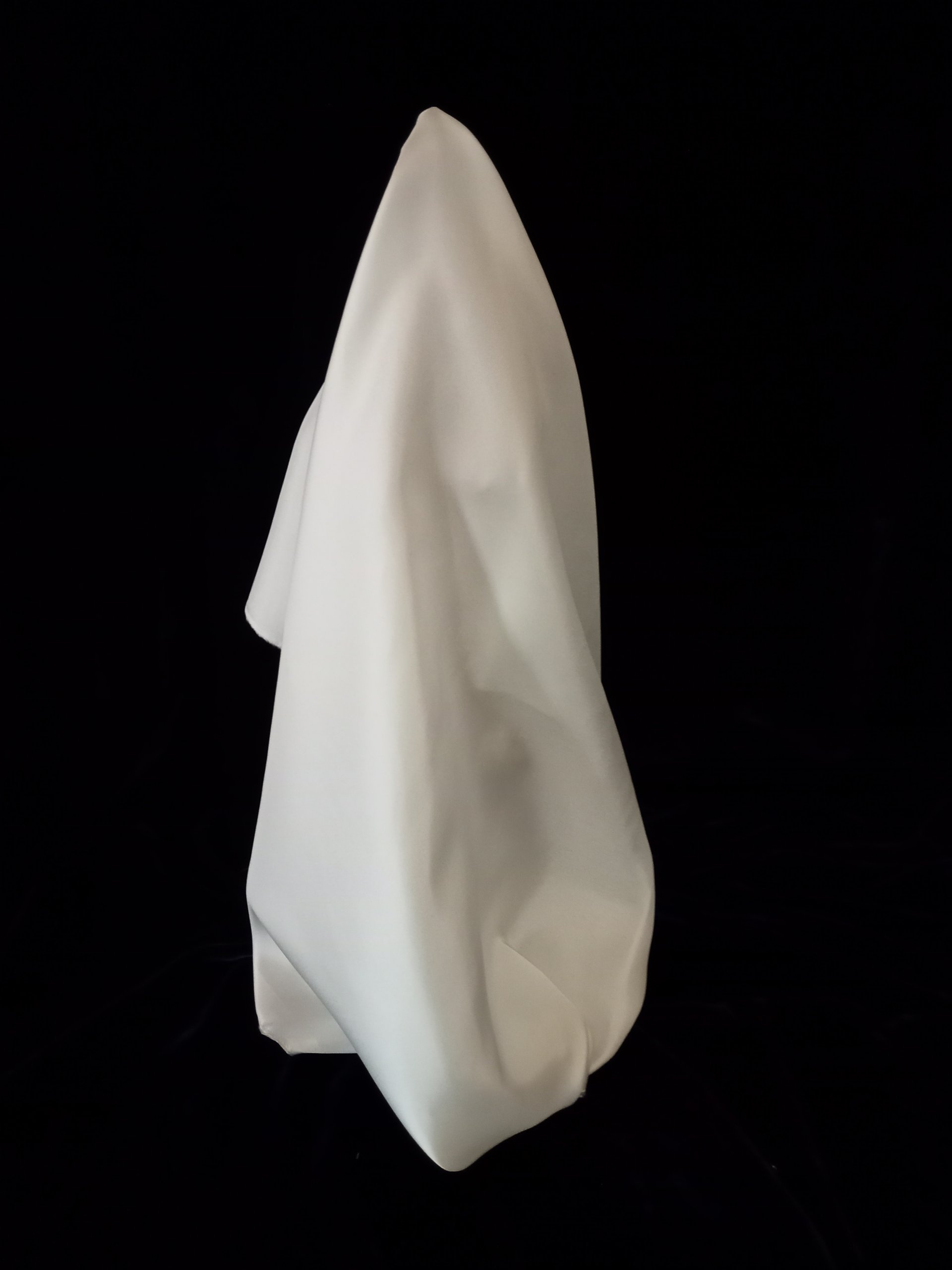 Twill is a type of textile weave with a pattern of diagonal parallel ribs. It is one of three fundamental types of textile weaves along with plain weave and satin. It is made by passing the weft thread over one or more warp threads then under two or more warp threads and so on, with a “step,” or offset, between rows to create the characteristic diagonal pattern. Because of this structure, twill generally drapes well.

My question is not listed here!

Please have a look at our Order section for more help, or contact us and we’ll do our best to answer your query.